You are here: Home / WordPress / WordPress and Facebook Image Previews – How Do They Work? Someone asked me last week why the image she wanted wasn’t showing up with the post title and description when she added her blog post to Facebook.

So I thought I would investigate further.

How does Facebook pull in images from WordPress posts and pages?

According to the Facebook Image Thumbnail support page for WordPress.com (this also applies to self-hosted WordPress);

Disclaimer: I was lazy and didn’t bother setting a meta description for my posts.

I tested posting links to my own timeline.

Facebook behaves a little differently when posting to a page, as I’ll explain below.

Test #1: Post with no featured image or any other images

If there are no images, Facebook can’t add one. 🙂

There’s a difference if I add the link to a Facebook page. 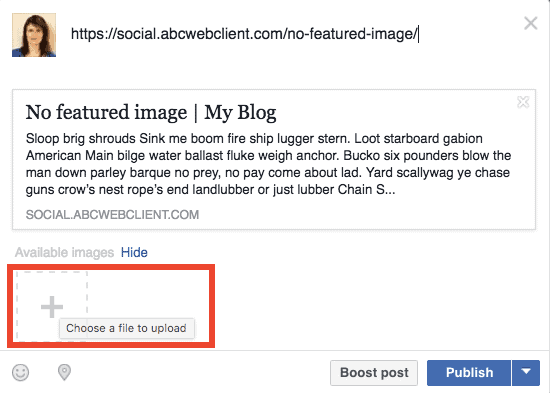 This time there’s a section below the preview pane with a +. Click on that and there’s the option to add your own image.

Unfortunately, the option doesn’t exist for personal posts or posting in groups. Grr!

Expected result: Preview images for the three images shown, starting with the first

Here is my post. The three images are of a parrot, a bottle of rum and a treasure chest, in that order. And here’s what I got posting the link on Facebook: You’ll see there is an arrow on the preview image. Clicking on that got me another image. But there were only two preview images, not three.

And the parrot, which came first in the post, wasn’t one of them.

Here’s the result, all ship-shape.

This one is a bit of a trick because WordPress doesn’t support multiple featured images by default.

I had to add the Multiple Featured Images plugin, create a child theme and modify some theme files.

I added two featured images to my post – a parrot and a treasure chest – then posted the URL on Facebook.

Even though there was more than one featured image for the post, only the first one was shown by Facebook. Facebook demands that a featured image should be of a certain size to display.

According to Facebook’s Best Practices for Sharing:

Use images that are at least 1200 x 630 pixels for the best display on high resolution devices. At the minimum, you should use images that are 600 x 315 pixels to display link page posts with larger images. Images can be up to 8MB in size.

Here’s the image as it looks in the post: Curses! Facebook said “no thanks” to my image as it was too wee.

Setting a featured image is the most reliable method of getting the image you want.

The featured image should be of the correct size.

Facebook’s Sharing Debugger is a handy tool for sorting problems.

Simply add the URL of the post you want to debug and the tool will return the information it has stored for the link. If the URL still shows a wrong or missing image and you want Facebook to update its information, you can try the Scrape Again button. But you may find it still doesn’t update.

A handy tip from Stack Overflow is to enter the URL with a query string following.

In plain English, this means adding a few extra parameters after your link e.g. ?v=1

Add ?v=1 to your link when running it through Facebook's debugger & solve image preview problems. Click To Tweet

Use the Fetch new information button.

This forces Facebook to refresh the data held and with any luck, it will return the correct image! You set the default image you want to use in Settings > General. You need the full URL of the image.

(Note that you might need to use the sharing debugger tool above.)

This plugin also sorts your images for Google+, too.

Many of us (myself included) will already be using Yoast’s popular SEO plugin.

You may not have noticed that Yoast has some hidden settings for social sharing of images.

You’ll see that Yoast recommends a larger image size of 1200 x 630 pixels. You can amend the title and description of your post for Facebook as well, if you want something more specific.

This way it’s possible to add no image or featured image to your post but to have one display on Facebook.

The only caveat I would add about adding a larger image is to make sure you optimise your image for the Web.

I have read that plugin conflicts can cause problems with image sharing.

The best way to check to see if there’s a possible conflict is to turn off all plugins and reactivate one by one. Tricky if you are running a live site.

I didn’t test them both together, but since both Facebook Thumb Fixer and Yoast SEO use Open Graph tags, I wouldn’t recommend using them on the same site.